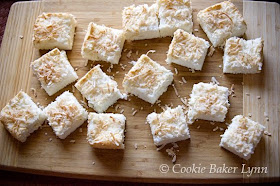 The sun is shining, the grass is green and growing, and I've been making ice cream. The freezer is usually stocked with at least four different frozen treats to choose from - it's a happy place. But in the refrigerator, life is not so sanguine. It's packed with egg whites. I can barely fit any food in because of all the little containers labeled "2 egg whites" or "5 egg whites." I know, I should freeze those egg whites promptly, but for some delusional reason, I'm sure that I'll get around to using them up quickly. I label them and consign them to a long and nasty life at the back of my fridge. My husband calls it my egg white Gitmo.

When thinking of what to do with egg whites, I always think of angel food cake. The only problem there is that it takes 10 to 12 egg whites, and it takes a while to collect that many egg whites and by the time I've gotten 12, the first 6 have gone bad. So I toss out the first 6 and optimistically hang onto the other 6. 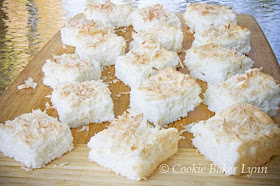 Browsing through a cake cookbook, I found the answer to my dilemma. An angel food cake that only takes 6 egg whites. It bakes in a square pan like a snack cake, and as a bonus, it's self frosting! Trust me, you'll want to bookmark this one. It's so easy, you can have the kids make it, so light and delicious, you'll want to have it often, and it makes a perfect accompaniment to the ice creams you make with the yolks. If you are a not a fan of coconut, you could leave that off, sprinkle on finely chopped nuts, or spread with whipped cream before serving. 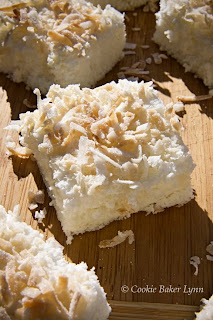 2-Beat egg whites until foamy. Add the cream of tartar and salt. Beat until soft peaks form. Gradually add the sugar, 2 Tbsp at a time, beating until stiff peaks form.

4- Pour batter into an ungreased 9-inch square baking pan. Sprinkle coconut over the top. Bake for 30 minutes, or until a wooden pick inserted in the center comes out clean. Cool in pan about 40 minutes. Remove cake from pan and cut into squares to serve.